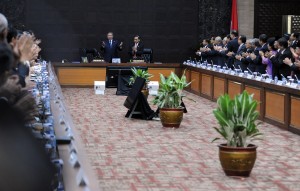 In his remarks delivered in the Plenary Cabinet Session, President SBY expressed his reflection on his experiences in leading Indonesia and its peoples in the last ten years. He mentioned that development is a long-term process which eventually development will make history.

President SBY stated that history has recorded that the cabinet he has been leading has done its best. Therefore, he expected us not to get discouraged if we have to experience failure in the process of achieving our aims even though we have done our best because development is still going on.

No need to regret what we have done, because I believe that we have done our best. However, the problems we face are often so difficult, complex, intertwined, and seemingly insoluble, President SBY stated.

For that reason, President SBY will be grateful if the ministers and the officials who have assisted him manage to write their respective memoirs to be presented to their offspring and the succeeding generations. Such memoirs can tell that in a slice of history, we had made our best efforts in accordance with our respective capacities, professions, duties, and responsibilities.

We need to realize that development is a long process, resulting from a huge amount of joint hard work done together by all this nations sons and daughters coming from various backgrounds and playing various roles, President SBY stated.

According to President SBY, continuity and constant changes are the characteristics of the transformation which Indonesia is now undergoing. For that reason, President SBY urged everyone not to be allergic to changes because the President-elect Joko Widodos leadership will certainly make changes.

We must understand that transformation results also from continuity and changes. I believe that we will manage to keep and maintain all the good results which this nation has obtained from president to president,” President SBY stated.

In the Plenary Cabinet Session, President SBY stated a number of successes that his administration has achieved. He mentioned that although Indonesias economy continually improves, it doesnt mean that we are free from problems, either in domestic, regional, or global levels.

However, Indonesia is considered to be able to maintain itself in stable condition in economic fields, thanks to our many job-creation programs, President SBY stated.

All the achievements, President SBY continued, lead to our successes in economic fields, attained with political stability.

President SBY reminded everyone that Indonesia has managed to end various security crises like the ones occurring in Aceh, Poso, and Papua which have caused security turmoil. Domestic security is maintained so that we can continue our economic development, President SBY explained.

In addition, bureaucratic reform also has its own records. Corruption cases both in central and regional governments, President SBY said, also indicated the distribution of power. However, President SBY called attention to the fact that the anticorruption campaigns in this present administration are the most aggressive ones.

President SBY also mentioned that in parallel with the re-arrangement after the crises, Indonesia has succeeded in increasing its roles in both regional and global levels (for examples in the G20 and in the United Nations). Other nations consider Indonesias roles positive and constructive so that Indonesia is expected to increase its roles continually, he said.

Even, President SBY continued, when he visited the USA last September, Indonesia is expected to provide continual assistance in efforts to mitigate global changes and to fulfill the post-2015 MDGs agenda.

According to President SBY, we must be grateful for all those achievements in the international levels, although we still have many shortcomings and homework to do, like bureaucratic reform and corruption eradication which certainly take time. (WID/Humas Setkab/ES)