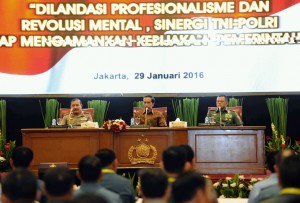 President Joko Widodo explained  the importance of productivity, work ethic, and competitiveness in facing the ASEAN Economic Community (MEA) era that has been started since the beginning of 2016. Therefore, we must start to leave ineffective old-school methods.

We must start to leave old patterns, ways, and traditions that make us move slowly, in order to respond to global changes. This is professionalism, the President said when opening the 2016 TNI-Polri Executive Meeting at PTIK (Indonesian Institute of Police Science) Auditorium, Jakarta, on Friday (29/1) morning.

Polri rapidly came to the blast site with the TNI backed it up though it did not move yet. If the TNI was needed, in one minute they would arrive at the location because they already got ready, the President said while mentioning that this kind of synergy is really needed.

To solve the problem together, particularly those related terrorism and security disturbances, the President added.

The President also asked TNI-Polri to move quickly and always be ready when a disaster, such as landslide, flood, or forest and peatland fires happens.

Moreover, the President reminded TNI-Polri to support and back-up the Governments priority programs, for example, the programs related with land acquisition, illegal levy, and dwelling time.

On that occasion, President Joko Widodo also asked all leaders of TNI-Polri to go to the field. Dont just give instruction from behind your desks, because by seeing the real condition which is very dynamic, the solution can be immediately found, the President affirmed.

Therefore, the President also instructed the apparatus of TNI-Polri to monitor food prices that become one of inflation sources. To see whether there are some people play the price, the President said.

To Exert All Efforts

Previously, the Chief of Indonesian National Police Badrodin Haiti, in his report, expressed the commitment of TNI-Polri to exert all efforts, strength, and capacity so that they can show their best and optimal performance in order to maintain the countrys sovereignty and security as the main requirement for the success of development.

TNI-Polri are committed to fully supporting all policies that are carried out by the President by optimally carry out their main duties, functions, and roles to enhance the synergy of cooperation with other stakeholders, Haitisaid.