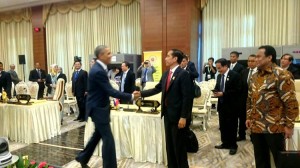 In the flight to Brisbane, President Jokowi and his entourage transited in Ngurah Rai International Airport, Bali, at 05.30 AM central Indonesia time. They set off at 07.00 AM local time and arrived in Brisbane at 02.50 PM local time.

Meanwhile, in his press release delivered to journalists in Nay Pyi Taw, Myanmar, on Thursday evening (13/11), President Jokowi stated that in his meetings in Beijing and Nay Pyi Taw with the leaders of a number of Indonesias friendly countries, he received many offers of cooperation in maritime sectors. President considered that those offers are very potential and must be managed well and made concrete.

Admittedly, what attracts other countries as regards Indonesia is the maritime axis, and they are interested to take part in it. Some countries want, for example, to get connected and build a kind of maritime silk road of the 21st century which connects and relates many countries. Technically, we havent got so far. Later on, technical teams will meet and then make the connections, President Jokowi said.

Besides the Peoples Republic of China (PRC), according to President Jokowi, other countries which are interested to build partnership with Indonesia in maritime sectors are South Korea and India.

For example, India also wants to establish cooperation in maritime defense sectors. I think South Korea has established such cooperation with Indonesia. China also wants to take part in our maritime industry. I think China really takes us into consideration because our territory is vast, and two thirds of Indonesias territory consist of seas. I think that attracts China to participate, President Jokowi stated.

Cooperation in maritime sectors, President Jokowi said, can include so many sectors like fisheries sectors, natural gases, crude oil, and other commodities. However, President Jokowi asserted that whatever the forms of the cooperation are, they must benefit Indonesia as much as possible.

But we must really calculate carefully who will benefit. We must make such calculation. We must calculate carefully how much they will get and how much we will get. Never let them get all. It seems so complicated, but if we get nothing from such cooperation, then it is meaningless for us, President Jokowi asserted. (*/ANT/ES)