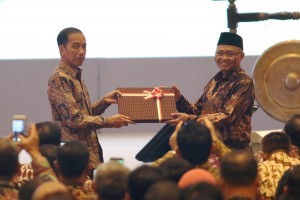 President Jokowi symbolically receives a password for e-LHKPN from Chairman of the Corruption Eradication Commission (KPK) Agus Rahardj at the Opening of the 12th Corruption Eradication National Conference as well as the Launching of e-LHKPN App at Bidakara Hotel, Pancoran, Tebet, South Jakarta, Monday (11/12). (Photo by: Ozi/Public Relations Division)

President Joko Jokowi Widodo said that legal enforcement in corruption cases is an important move in the fight against corruption. According to the President, based on the Governments data, between 2016-2017 law enforcement has been able to save Rp3.55 trillion of state money from corruption.

President Jokowi even believes that Indonesia is one of the countries that have been active in enforcing the law in corruption cases which can be proven that since 2004 until now, at least 12 governors and as well as 64 mayors and regents have been arrested for committing corruption.

That excludes high-ranking officials and members of the House of Representatives (DPR)/Regional Council (DPRD). I dont know how many exactly. And the majority of the cases are bribery, the President said in his remarks at the Commemoration of World Anti-Corruption Day 2017 and the Opening of the 12th Corruption Eradication National Conference as well as the Launching of e-LHKPN App at Bidakara Hotel, Pancoran, Tebet, South Jakarta, Monday (11/12).

Nevertheless, President Jokowi questioned why there are still high-ranking government officials who are arrested and imprisoned for corruption charges from time to time.

So it is undeniable that our efforts to prevent corruption must be made more seriously, he said.

President Jokowi also considered that it is time to improve governance system, public service system, administration system, and the peoples knowledge, awareness, and public participation in preventing corruption must also be improved and promoted.

According to the President, one of the strategies to prevent corruption stressed by the Government is de-regulation. According to him, de-regulation that protects public interest is very important. Nevertheless, President Jokowi acknowledged that every de-regulation measure is like a double-edged sword.

Every regulation, every permit, and every requirement has the potential to become the object of transaction and the object of corruption, the President concluded.