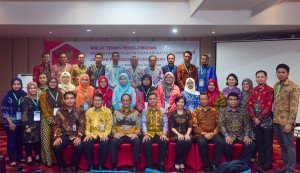 “(In my) experiences of accompanying Cabinet Secretary when meeting with foreign guests, many complaints were conveyed by both friendly officials and investors in understanding the countrys laws including laws, presidential regulations, and regional regulations,” said Thanon during his remarks at the Opening of the 2019 Technical Training on Translation of Government Legal Draft, Bogor, West Java, Monday (24/6).

For this reason, h3 added, reliable translators are needed to play a strategic role and to serve as a means for disseminating Indonesian law to the international community.

The translators are expected to master the source and target languages equally well, in addition to understanding national and international regulatory conventions and legal terminology in related fields, he added

Thanon also expressed belief that this technical training would be able to support the translators tasks, especially in the translation of legal texts.

In 2017 and 2018, he continued, participants of the 2016 technical training contributed to the success of the Government’s program in Ease of Doing Business (EoDB) through the translation of 1,000 pages of national legal products related to investment, which became a comparative material for EoDB assessment by the World Bank.

Thanon stated that translator as a profession is growing and becoming an option for the regional state civil apparatus.

“Hopefully, this development is a manifestation of the regional state civil apparatus awareness to work as translators, to seize open opportunities, to contribute to the development of their respective regions,” Thanon said.

For this reason, Thanon encouraged translators to continue improving their translation competencies, through various training, courses, and seminars. He asserted that the role of the translator will be increasingly needed by central and regional government agencies in line with the provisions of Law Number 24 of 2009 on Flags, Languages, and National Symbols, as well as the National Anthem. 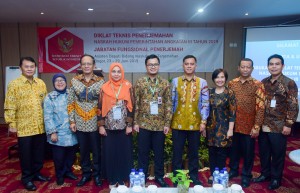 Previously, Assistant to the Deputy Cabinet Secretary for State Documents and Translation Eko Harnowo stated that before this year, Cabinet Secretariat had held a similar training twice in 2016 and 2018.

“The technical training turned out to be timely because only a few months later the Functional Translator Officials (PFP) of the technical training participants had been able to answer the challenge of translating national legal products related to investment, namely to raise Indonesia’s ranking on the EoDB list issued by the World Bank for the year 2017,” Eko said, adding that Cabinet Secretariat holds the third technical training this year on 24-29 June 2019

In this training, Professor of International Law at Diponegoro University, Semarang, Eddy Pratomo will become a keynote speaker, while legal translation expert and lecturer at Atmajaya Catholic University Evand Halim will become the lecturer. (AGG/ES)