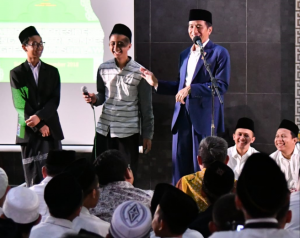 President Joko Jokowi Widodo reminded all elements of the society to be able to maintain unity, harmony and brotherhood because with these three things, the very diverse Indonesian people can continue to unite.

In Afghanistan there are seven tribes which two of them fight each other since 40 years ago until now. They only have seven tribes. Imagine what it would be like if that happens here, a country with 714 tribes, President Jokowi said before santri (Islamic Boarding Schools students) and educators of Bumi Shalawat Progressive Islamic Boarding School, Sidoarjo Regency, East Java, on Thursday (6/9).

Therefore, the President invites all people to continue to nurture and protect this country along with its diversity. The Head of State also reminded to continue to get along well despite different political choices.

Having different political choices is fine, but please keep our unity and don’t split up, the President said.

President Jokowi also calls on all parties to implement good prejudice and positive thinking. Reflecting on the condition on social media, please don’t be prejudiced, suspicious, and have negative thinking about other people. If all people act like that, what would our country be like? the President said.

Indonesia has enormous potential, the President added, and cited the example of Indonesian athletes achievements at the recent 2018 Asian Games. We ranked 4 in medal tally. We used to get 4 gold medals but now we get 31. At the previous Games, we were at rank 17 but now we are 4th because of our hard work. If you want to advance, don’t be lazy, President Jokowi said.