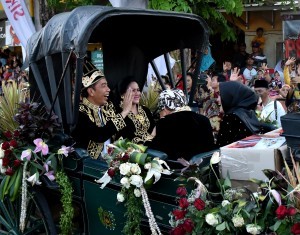 The event was attended by approximately 300 kings, sultans, queens, princes, and traditional leaders who are members of the Keraton Nusantara Gathering Forum (FSKN), as well as representatives from ASEAN countries such as Thailand, Singapore, the Philippines and Malaysia.

In his remarks, President Jokowi said that the festival highlights the diversity of Indonesia.

“We have different religions, different customs, different traditions and different ethnicities. This is the gift that God gave to our nation Indonesia,” President Jokowi said.

The President further said that those differences will become a potentiality and strength if the nation is united. The progress in technology, the President added, shall be in line with the development of civilization.

“Indonesia’s progress should be based on its local wisdom,” President Jokowi said, adding that he invited all people to maintain the nations unity and harmony and avoid hate speech, slander, and hoax.

(Those negative things) were not conducted by our ancestors, kings, sultans, and traditional leaders in the past,” the President said, adding that he calls on all Indonesian people to build and bequeath the great as well as respectable Indonesian civilization.