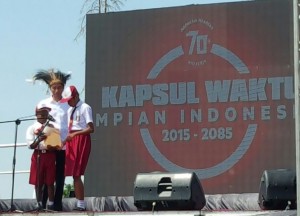 The Indonesian Dream Time Capsule is a historical mean to store the documents of the peoples dreams from all provinces in Indonesia, that put in 2015 and will be opened in 2085.

In his remarks, President Joko Widodo said that this Time Capsule has collected all peoples hopes and dreams, from Zero Kilometer in Sabang City to Merauke Regency in Easternmost of Indonesia.

We are unifying the dreams of all people in each province. We make it as one: one land, one nation, and one language, the President said.

The President hopes this dream can become a direction guide to the future that has been dreamed together by all Indonesian people.

It is our duty to ensure that these dreams will be realized. What we did today is a heritage for our future generation, the President said while mentioning that the land of Papua is the right place to start the effort to reliaze the peoples dreams in a time capsule.

However, President Joko Widodo reminded that the dreams can only be realized with hard work. Remember, our vision is competition. I am sure, with collective works and the spirit of mutual cooperation, we will be able to fulfill our dreams, he said.

On that occasion, the President also expressed his appreciation to the Movement of 70 years Independence of Indonesia that has been initiated the Time Capsul Expedition. Now, it is our duty to realize it, instead of waiting it to be realized. A dream can not be realized by itself. We have to put our effort to make it comes true, the President said.

1. Indonesian human resources to excel other nations in the world;

3. Indonesia to be a center of education, technology, and world civilization;

4. The Indonesian people and state apparatus to be free from corruption;

5. Equal infrastructure development in all over Indonesia;

6. Indonesia to be an independent and the most influential country in Asia Pasific; and

7. Indonesia to be the barometer of the worlds economic growth.