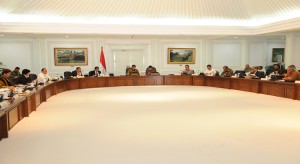 Jokowi accompanied by Vice President Jusuf Kalla, lead the limited meeting to discuss the impact of El Nino, in the President’s office, Friday (31/8)

Government to be responsive in the face of the impact of the El Nino phenomenon, which being struck Indonesia. In the Limited Meeting on the Impact of El Nino on the Drought and Fire Fighting Efforts of Forest and Land that held on Friday (31/7) in Jakarta, President Joko Widodo (Jokowi) ordered the ranks of that are within his administration to be aware and prepare measures in anticipation of a long drought, as the impact of El Nino, especially on agriculture, fisheries and forest / land.

Besides asking a recent report to the Head of the Meteorology, Climatology and Geophysics (BMKG) and Head of the National Institute of Aeronautics and Space (LAPAN) on El Nino and the impact nationally, President Jokowi also asked the Minister of Environment and Forests and the Head of the National Disaster Management Agency (BNPB ) to anticipate the potential for forest and land fires in several regions in Indonesia.

“The President asked if there is a small fire point, must be immediately extinguished. Should not wait for the fire become enlarged that could lead to disastrous,” Teten said through a press release on Friday (31/8).

Communication Team of President added that President also ordered the Coordinating Minister for Economic Affairs to carry out the maximum rescue measures that can be done by the government to farmers who suffered harvest failure or plant failure due to prolonged drought.

The same command given to the Minister of Maritime Affairs and Fisheries. Although in some cases of El Nino have a positive impact because it brings the abundant fish harvest, but the impact of strong winds can also harm the fishermen because they cannot go to sea.

While the Minister of SOEs and President Director of Bulog, according to Teten, in addition asking for a report on the setting and distribution of basic needs commodities, President also ordered that the market operations should carried out continuously.

“This is to anticipate the emergence of speculators hoarder the basic needs that could lead to soaring prices by using food shortages,” Teten said.

Finally, Teten continued, the President ordered the Minister of Home Affairs to coordinate with the governors, especially in provinces prone to forest fires and suffer from long drought, to cooperate with the central government to minimize the impact of El Nino.

Long droughts in some parts of Indonesia, particularly in the south Equator in 2015 allegedly is impact of El Nino phenomenon that has reached a moderate level. This situation is predicted to strengthen from August to December 2015.

The phenomenon of long droughts are already happening in several regions in Indonesia such as Java, South Sulawesi, Lampung, Bali, NTB and NTT. From the Map Monitoring Day Without Rain BMKG, these areas already suffering from drought since last May 2015. (ES)