Livestock Vessels to be Developed in Other Provinces, President Jokowi Says 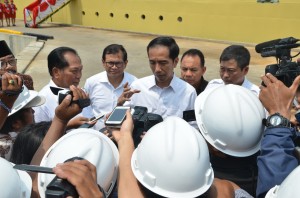 President Joko Jokowi Widodo said that vessels, which were specifically designed to transport livestock, that he inaugurated in Bangkalan, East Java, on Tuesday (10/11) would also be developed in other provinces in addition to East Nusa Tenggara (NTT) or West Nusa Tenggara (NTB) provinces, both of which are the countrys major livestock bases.

Special vessels to transport livestock is important to smoothen the distribution flow of goods and livestock from one province to others, from one island to others, from one city to others, President Jokowi said to the reporters in a door-stop interview after inaugurating KM Camara 1, a ship specialized to transport livestock; KM Sabuk Nusantara 56 vessel type 750 DWT, and KM Sabuk Nusantara 55 vessel type 750 DWT, at the shipyard of PT Adiluhung Sarana Segara Indonesia (ALSSI) in Bangkalan Regency, Madura, East Java, on Tuesday (10/11) afternoon.

On that occasion, the President also expressed his hope that after the inauguration of the vessels,  transportation for people and livestock could be provided and national logistics distribution could run well and the price of goods could be reduced accordingly due to cheaper transportation fees.

Minister of Transportation reported that this year, we have 200 livestock vessels. It will be added by 160 vessels next year. In the following years, the number will be added by certain pattern; 160, 200, 160, 200, President Jokowi said.

Asked about the impact of those vessels to wooden ships produced by the people, President Jokowi said that Ministry of Maritime Affairs and Fisheries had ordered around 3,600 vessels, that were mixed with wooden vessels and those vessels were meant to be distributed to small-scale fishermen.

The big vessels are owned by state-owned enterprise (BUMN). I heard there is an order from Batam to buy a tanker from PT. Pertamina (state-owned gas and oil company). It means those vessels are capable of transporting livestock. We can not underestimate the potentials of our shipyard, President Jokowi firmly said.

According to President Jokowi, Indonesia had always lost in the global competition because of the (high) costs of transportation. He cited the example of Australian livestock that enter Indonesia with competitive prices due to its cheap transportation costs.

Our weak point lies in the transportation costs. Transporting (goods) from one province to others is still very expensive. We hope the issues could be addressed one by one, Jokowi said.

Whats more interesting is the vessels was the vessels specifically designed to transport livestock  that are operated and built in Indonesia, Jonan said, adding that the vessels will transport 500 livestock and serve Kupang-Bima-Tanjung Perak-Tanjung Emas-Bima-Kupang route and those vessels must follow international standard.

They must guarantee that livestock would not be under stress and pressure and they (livestock) are provided with free space, Jonan said. (JAY/ES) (RAS/EP/YM/Naster)