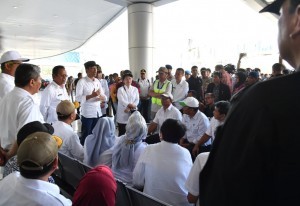 Logistics distribution for the victims of the earthquakes and the tsunami in Palu and its surrounding areas needs to be improved in several aspects, according to President Joko Jokowi Widodo.

The President added that the team assigned to distribute aid has not been able to reach several locations affected by the quake.

Several sub-districts cannot be reached yet by land transport. Thats why I have instructed related officials to solve this matter today, President Jokowi told reporters after a limited meeting at the Mutiara Sis Al-Jufrie Airport, Palu, Central Sulawesi, on Wednesday (3/10).

After knowing the situation on the ground, we will evaluate the progress, he added.

The President has also instructed Central Sulawesi Governor and his ranks to urge the residents to restart their economic activities, which have been paralyzed since the quake and the tsunami hit the region. The President also expressed hope that storeowners in quake-affected areas can open their businesses.

We urge the residents to start running their business again. Personnel from the Indonesian National Defense Forces will ensure security in economic districts so that the economy can return to normal, the President said.

President Jokowi also noted that the process to evacuate the victims had been done smoothly and added that heavy equipment are already deployed for the evacuation process. In addition, handling and treatment of the injured and those who are hospitalized in Palu and those who are sent to hospitals in Makassar have also been running well, he said.