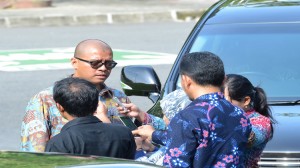 In order to find the successor of Hamdan Zoelva whose tenure ends on 7th January 2015, President Joko Widodo (Jokowi) signed Presidential Decree regarding the formation of Selecting Committee (Pansel) of Constitutional Court (MK) Justice on Monday (8/12).

Cabinet Secretary (Seskab) Andi Wijayanto told reporters when he accompanied President Jokowi in his visit to Yogyakarta on Tuesday (9/12) that the Pansel consisted of two steering committees which were Minister of State Secretary (Mensesneg) Prof. Pratikno and Minister of Law and Human Rights Yasonna H Laoly.

According to Andi, the Pansel was in charge of determining three candidates of constitutional justice from government element. It is hoped that the selecting committee holding the principles of transparency, accountability, and participation will result qualified candidates of MK justice, he said.

Seskab explained that the three nominees selected by Pansel would then be submitted to President Jokowi as successor candidates of MK Chief Justice Hamdan Zoelva. President Jokowi will select one constitutional justice of the candidates who are from government element, he added.

As known, MK has nine members of constitutional justice who are determined by Presidential Decree. The nine justices are form different agencies among others Supreme Court (MA), House of Representatives (DPR), and president or government.