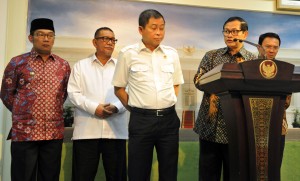 Cabinet Secretary Pramono Anung delievers a press statement after a limited meeting on Wednesday (8/6), at the Presidential Office, Jakarta

Alhamdulillah, at todays meeting, we have addressed all problems (related to LRT development) including the differences between the central and regional governments and state-owned enterprises, Pramono told the reporters after a limited meeting.

The meeting has also agreed on the dividing of inter-provinces and intra-province (in Jakarta) tracks,  Pramono said.

In relation to funding, President Jokowi decided the arrangements in the meeting, including the operational, tickets, and others that have been arranged between the Central Government and Jakarta Provincial Government, Pramono added.

In the meeting, it was also decided to use regular size railways rail to minimize the number of tracks needed.

Pramono also said that the revision of Presidential Regulation on LRT development particularly in Palembang will be completed in a week while LRT development in Greater Bandung is now under discussion because they need to calculate and construct the tracks first. (FID/JAY/ES)(RAS/EP/YM/Naster)