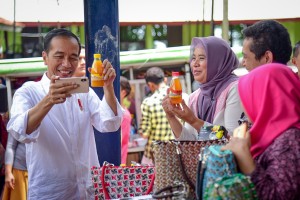 President Joko Jokowi Widodo urged participants of the Fostering the Economy of the Prosperous Family (Mekaar) program to maintain trust given to them with honesty, discipline and hard work.

For the record, the participants are given capital loan by state-owned community development institution PT Permodalan Nasional Madani (PNM) amounting to Rp2-3 million without collateral.

Do not lose trust, either from the PNM or from your buyers, President Jokowi said to the Mekaar participants in Muara Gembong, Bekasi Regency, West Java, Wednesday (30/1).

Previously, President Jokowi stated that he had started his business in micro scale. From micro businesses then it grow up to a higher level, to small businesses, he said. Based on his experience, President Jokowi expressed hopes that the Mekar recipients will gradually upgrade their business so they could get a bigger loan.

If the loan has reached Rp6 to 10 million, the President continued, the Mekaar recipients can be upgraded to the Smallholder Bussiness Credit (KUR) program recipients and apply to the nearest state-owned bank to get a loan. Be it Rp10 million, Rp25 million, or Rp500 million, it is all right The most important thing is discipline, honesty and obedience to pay the installment, President Jokowi said. (RSF/AGG/ES)