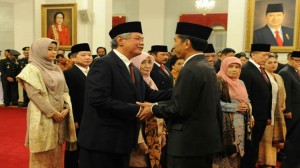 President Jokowi congratulated to the members of the newly inducted Wantimpres, at the State Palace on Monday (19/1)

At the inauguration ceremony, the Presidential Decree  (SK) No. 6 / P / 2015 on Appointment of Members of the Presidential Advisory Council was read by the Deputy Minister of the Secretariat of State for Human Resources Cecep Setiawan, and in effect since this Decree was read. In the SK appointment was mentioned, that the nine members of the Wantimpres will receive a facility similar to that given to the Minister of State.

The inauguration event that lasted for 30 minutes was attended by Vice President Jusuf Kalla and the Work Cabinet Ministers, the Army Commander General Moeldoko, the Acting. Police Chief Badrodin Haiti and intelligence(BIN) Chiefs Marciano Norman, the Chief of Staff of the Indonesian Navy (AL), Army (AD), Air Force (AU), as well as high ranking officials of the Ministry of State Secretariat and Cabinet Sekretriat.  (Humas Setkab/ES)