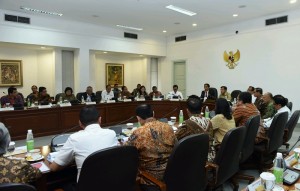 A Limited Meeting on Masela Block, at the Presidential Office, Jakarta (1/2)

President Joko Jokowi Widodo in a limited meeting, at the Presidential Office, on Monday (1/2) afternoon continued the discussion on Masela Block project, which is located on South East Maluku Regency.

During the meeting, the President said that he has not decided yet whether the development of Masela Block will be conducted onshore or offshore, in land or on sea, before he meets the investors and contractors which will develop Masela Block directly.

The President admitted that he still wants to know the things related to the development of areas around Masela Block.

While the Governor of Maluku is present here, I think we also need to know things related to the development of the area, President Jokowi said in a remarks on a limited meeting at the Presidential Office, Jakarta, on Monday (1/2) afternoon.

In his remarks, President Jokowi stressed on two points. First, the Constitution mandate firmly and clearly states that natural richness is exploited to the greatest benefit of the people, for all citizens, and not only for a group of people and second, the Government must be able to exploit oil and gas.

Oil and gas exploitation, the President added, must bring added values in order to give multiplier effect as mentioned in the previous meeting and multiplier as intended applies on regional economy and particularly the economy in eastern Indonesia.