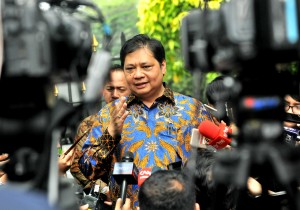 In the period of January until May 2019, manufacturing sector imported products worth US$51.06 billion, or 74.59 percent to the countrys export value, he added.

The Government, Airlangga added, is also committed to boosting investment and expansion in the industrial sector.

In addition to meeting the needs of domestic market, increased production capacity can also fulfill export market, he said.

According to Airlangga, the United States, China, Japan, Singapore, and India are some of the main destination countries for the countrys manufacturing products.

The Minister went to say that the Government has been taking intensive measures to attract investment in industrial sector which can produce imported substitution products. Such measure constitutes one of the Governments efforts to curb trade balance deficit, he said.

The Government has shown its commitment to maintaining a positive business climate in the country by providing ease in obtaining business licensing, ensuring availability of raw materials and energy, as well as issuing fiscal incentive policies to spur industries to be involved in vocational and R&D activities, said Airlangga.

The roadmap spurs quality product innovation so as to increase national products competitiveness in the global market.

Regarding efforts to boost investment and exports, Airlangga said that the Government is committed to creating a positive business climate and providing ease in business licensing. A number of strategic steps have been taken, including providing fiscal incentives and single submission online (OSS) system and implementing vocational education and training programs.

Amidst economic slowdown at the global level, Arilangga expressed optimism to meet non-oil and gas industry growth target of 5.4 percent this year. Some sectors that are projected to grow include food and beverage industry (9.86%), machinery (7 %), textiles and apparel (5.61%), and leather goods and footwear (5.40%).