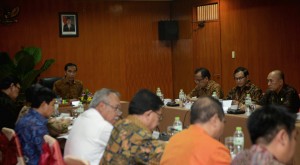 President Joko Jokowi Widodo said that as the world-renowned cultural-heritage site, Borobudur Temple must continue to be preserved, especially because the Temple has now become a tourist destination that brings benefits for the people living nearby.

Therefore, according to the President,  market potentials that the Temple has  are still very open, especially for tourists from Malaysia, Taiwan, Singapore, Japan, the United States, the United Kingdom, Hong Kong, the Netherlands, Germany, Brunei Darussalam, and China.

The development of Borobudur Temple must be prepared well. Its development must also be integrated among ministries and among provinces. It must also be integrated with other tourist destinations such as Prambanan Temple or Sangiran, both of which are also cultural heritage sites, the President said in his opening remarks before a limited cabinet meeting on the measures to accelerate the development of Borobudur as a national tourist destination at Manohara Hotel, near Boroudur Temple, in Muntilan, Magelang, Central Java on Friday afternoon (29/1).

The President considered that Ministry of Tourism has managed to build the countrys branding; thus the Government can make fast moves.

I supposed if the planning is done, we have to do positioning; afterwards, we build the brand product, the brand value and other products so in marketing, it will make us easier to market it, the President said.

President Jokowi also hopes that international standard for facilities and services should be prepared.

The President also reminded that hotels provided must be at least 4-star hotel, but it must also be taken care of, maintained, and controlled on a daily basis.

We hope to reach the standards, he added.

In the meantime, the President said art and cultural performances held in Borobudur should not only be about the Temple but also other cultural attractions.

Regarding the management, President Jokowi acknowledged that the management must be clarified because it is reported that 4 managements are in charge in Borobudur Temple.

If there are four managements, it will be difficult to make decisions. This is what we have to decide. We also have to reach a decision on other issues, including zoning, the President said.

President Jokowi also hoped that during the meeting, a decision can be made and the plans can be immediately implemented on the ground, so changes can be really made.

I hope the number of visitors can significantly increase, the President said.

Before leading the meeting, President Jokowi also visited the Temple.