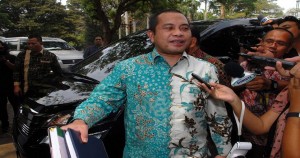 Minister of Village, Disadvantaged Rural Development and Transmigration (Mendesa) Marwan Jafar asserted that according to the direction of the President, the Village Fund should be prioritized for the development of infrastructure that are labor intensive such as making the village road, village reservoir, village irrigation, bridges limited, relatively long bridge (talud), and others.

As for the absorption of funds, President Jokowi also provides guidance that everything is driven to accelerate. “Alhamdulillah, the accelerating absorption in all ministries and includes the heads of the region are significant now, because our target for the absorption in nationally is 94%,” said Marwan told to reporters after the Government’s Work Meeting (RKP) at the State Palace, Jakarta, Wednesday (21 / 10) night.

Therefore, according to Mendesa, in terms of the absorption of all also expected to be on the track. “I take an example, the first and the second stage of the Village Fund absorption has reached 79 percent,” Marwan said.

Related to the evaluation of the use of the Village Fund, Marwan said that the Regents currently are preparing the report and will be delivered to the respective ministry “Regarding the evaluation of the first and second phase absorption, they (regional head) will send a report. Once the report is received, we will see the usefulness for any use,” Marwan said. (EN/RAH/ES)/Sy