Masela Block to Begin Production in 2027 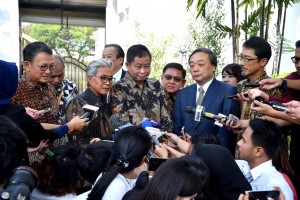 The project agreement between the Indonesian Government and Japanese giant Inpex Corporation to develop liquefied natural gas (LNG) project in oil-rich Masela block in the Arafura Sea in Maluku province is worth US$19.8 billion and the project is slated to begin production in 2027.

The statement was made by Minister of Energy and Mineral Resources Ignasius Jonan on Tuesday (16/7) in Jakarta.

This is the largest foreign investment since 1968, Jonan said.

According to Jonan, the project could provide employment for 30,000 people, both those directly working for the project and supporting workers on the construction phase and 4,000 to 7,000 workers during operation.

The Government approval to the revised PoD is an important milestone for the project, Jonan added.

In addition to the approval of the PoD revision, the Government has also approved applications for an additional 7-year time allocation and extension of the production sharing contract (PSC) on Masela block for 20 years until 2055.

With the start of this project, the Government is expected to receive an investment of around US$39 billion and around US$37 billion for Inpex.

The Inpexs figure includes 10 percent contribution for the area. The figure also can still be optimized from petrochemical industry and potential investment of 5 billion US dollars in the area.

The amount of natural gas output in the project is estimated at 10.5 million tons per year, covering around 9.5 million tons of LNG per year and supplying gas for locals through pipelines as well as around 35,000 barrels of condensate per day. (Biro Komunikasi dan Layanan Informasi Kementerian ESDM/ES)