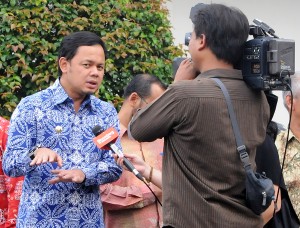 The Mayor of Bogor, Bima Arya

Mayor of Bogor, Bima Arya Sugiarto expressed that the Bogor residents ready to welcome the presence of President Joko Widodo (Jokowi) for offices in Bogor Palace.

“It is an honor and privilege for the citizens of Bogor, moreover it is in line with our step that would like to organize the area around the Bogor Palace and Botanical Gardens,” Bima Arya said to reporters on the yard of State Palace, Jakarta, Wednesday (11/2). Mayor of Bogor was present at the Presidential Palace to attend the limited meeting with President Jokowi to discuss about flood disaster management in Jakarta.

Related with the plan, Bima Arya claimed to have taken steps to anticipate such as organizing the pedestrian, organizing street vendors (PKL), as well as traffic flow around Bogor Presidential Palace.

While the Cabinet Secretary, Andi Widjajanto said, President Jokowi has no plans yet to move from the Merdeka Palace in Jakarta to the Presidential Palace in Bogor, West Java. However, Andi added, Bogor Palace is much more conducive and more widespread, and the protocol as well as household certainly should prepare Bogor Palace as an alternative residence of the President.

“The meetings will be effective if for example, there are some days in a week held the meeting in Bogor and President overnight in Bogor,” Andi said, at the Presidential Palace, Jakarta, Tuesday (10/2). (WID/Humas Setkab/ES)