Media Must Be Protected in Delivering Information to Public, President Jokowi Says 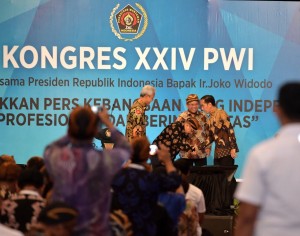 Given the medias vital role in the development of Indonesias democracy, the President pointed out that press freedom is fundamental that needs to be maintained and serves as a spirit of reform.

“Media must be protected in delivering information to the public,” the President said at the opening of the 24th National Congress of the Indonesian Journalists Association (PWI) at The Sunan Hotel, Solo, Central Java, Friday (28/9).

“This is essential. Whatever the profession is, as professionalism improves, welfare must be improved as well,” the President said.

On that occasion, President Jokowi also invited PWI members and journalists to collectively shape Indonesia’s democracy to be more qualified, healthier and stronger. “We have to work together to prevent people from being divided due to different political choices,” the President stated, adding that it is the Unitary State of the Republic of Indonesia that binds us together and unity is a national asset that must be maintained and safeguarded.

For this reason, the President puts emphasis on the roles of media in building democracy, checks and balances, and strengthening public participation and expressed his belief that press freedom will lead to responsive, transparent, and accountable governance.

Regarding criticism voiced by the media, the President considered it legitimate because through criticism, the Government would be able to improve its performances; yet, he emphasized that criticism is not looking for mistakes and it is different from slander, provocation.

Also accompanying the President on the occasion were Minister of State Secretary Pratikno, Minister of Communication and Information Rudiantara, Governor of Central Java Ganjar Pranowo, and Chairman of the Central PWI Margiono. (UN/BPMI Presidential Secretariat/ES) (MUR/EP/YM/Naster).