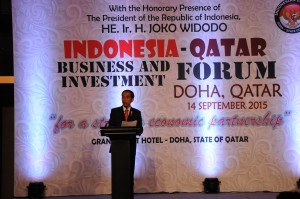 President Joko Widodo (Jokowi) said that at present is the right time for investors to invest in Indonesia. He mentioned that the whole business opportunities in Indonesia, promising certainty and an excellent business climate.

“I welcome the arrival of relatives entrepreneurs to the country that all business opportunities are wide open. Come and invest in Indonesia,” President Jokowi said, in his speech at the forum of business and investment Indonesia and Qatar, in Doha, Qatar, on Monday (14/9).

To the entrepreneurs, President Jokowi explained that Indonesia being intensively build the mega projects, among others, 24 new ports, 15 new airports, 1,000 km of highways, 49 dams, 35,000 MW power plant, and the construction of the MRT in 23 major cities in Indonesia.

According to the President, the development projects are complementing the plan to make Indonesia as a center of manufacturing industry.

For the realization of these projects, President added, Indonesian government has allocated 21 billion dollars US from the state budget in 2016. Although some of projects have been initiated, the President said that Indonesia still needs investment from the private sector.

So far, the President said, Indonesia and Qatar have a long history of excellent partnership, not only in trade and in economics, but also partnership in various fields including economics for the people welfare.

“I invite all of you to continue to build the relationship in the economic, social, cultural, and political between the two countries,” President Jokowi said.

After attending the forum, President Jokowi then received a number of Qatar business community, namely the Chairman of Qatar National Bank, Ali Ahmed Al Kuari and Chairman of the Chamber of Commerce of Qatar, Sheikh Halifa. (RON/ES)/Sy.