Meeting His Counterpart, PM Lee Expresses His Gratitude for Haze Handling in Indonesia 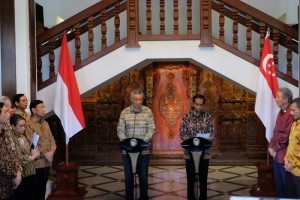 Prime Minister of Singapore Lee Hsien Loong said that the relations between Indonesia and Singapore is in good condition at every level. Both countries want to strengthen cooperation in the field of economy.

“It is my hope that Indonesia is successful,” PM Lee said at a press conference with President Joko ‘Jokowi’ Widodo, at Wisma Perdamaian, Semarang, Central Java, on Monday (14/11) morning.

PM Lee explained that although in fact Singapore is a small country, President Jokowi said that it is the biggest investor in Indonesia.

Singapore companies, according to PM Lee, are not only investing in the area of ??BBK (Batam, Bintan, and Karimun) but in other places in Indonesia as well, including in Kendal Industrial Park that would be opened on Monday (14/11) afternoon.

“This is a significant, large-scale project and will create up to 4,000 jobs in Semarang, Kendal. That is a win-win outcome for both Singapore and Indonesia,” PM Lee affirmed.

In a bilateral meeting with the Indonesian Government delegation led by President Jokowi, according to PM Lee, the continuation of cooperation in other fields, particularly tourism, was also discussed.

According to PM Lee, the two countries have signed a Memorandum of Understanding (MoU) in the field of tourism, and opened more cruise routes, addressing the cruise industry which is growing rapidly.

When it comes to investment, PM Lee said that investment between the two countries, particularly in the field of energy sector, has increased considering Singapore and Indonesia can collaborate to contribute to the development of 35,000 MW of electricity.

“President Jokowi has agreed. This will enable our businesses to create closer networks and seize the opportunities in both countries,” PM Lee said adding that the council is made up of business players in both countries.

On the occasion, Prime Minister of Singapore also said that he and President Jokowi also discussed other bilateral issues, including cooperation on counterterrorism.

“I am also grateful to the President for the handling of haze disaster in Indonesia,” PM Lee Hsien Liong concluded. (AGG/ RAH/ES) (MUR/LW/Naster).