Meeting Indonesian Community in India, President Jokowi: Many Opportunities Can Be Utilized 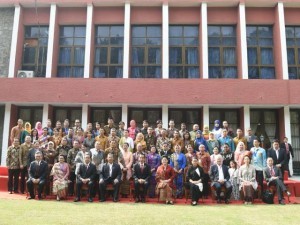 “The Indian Government wants that the cooperation between Indonesia and India be continued,” said the President explaining the results of his meeting with Indian President Pranab Mukherjee and Indian Prime Minister Narendra Modi, as well as with Indian Vice President Mohammad Hamid Ansari.

According to the President, many opportunities can be utilized as a result of a closer relationship between India and Indonesia. Previously, we only focused on two main products: palm oil and coal.

President Jokowi went on to explain that the results of his meeting with Prime Minister Modi indicated that the opportunities for Indonesian products to enter India is tremendous. “Therefore, a working team from Indonesia and India should seize this opportunity immediately,” the President said.

Cooperation opportunities are also revealed in the meeting between President Joko Widodo and 20 CEOs of leading companies in India. “I believe that the opportunities of trade investment, tourism from and to India, and vice versa are more visible,” the President said.

During the meeting, Indonesian Ambassador to India Rizali Wilmar Indrakesuma reported that various events of President Jokowis working visit have been running well.

“Hopefully the results can be immediately implemented and bring good outcomes for the relationship and cooperation between the two countries,” Rizali said.

Rizali said that the Indonesian people who attended the gathering with President Jokowi are Indonesian nationals who are married to Indian citizens and also those who reside in India. There are also experts from Indonesia who work in institutions in India, as well as 200 Indonesian students.

??President Joko Widodo and his entourage went to the Palam Air Force Base, New Delhi, India, to take off towards Tehran, Iran, onborad the Indonesian Presidential Aircraft-1 at approximately 14:30 local time.