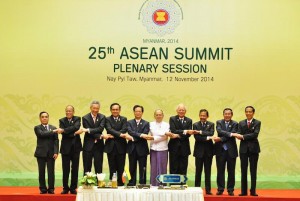 In his official visit to President of the Republic of the Union of Myanmar U Thein Sein, before attending the opening of the 25th ASEAN Summit in Nay Pyi Taw on Wednesday (12/11), President Joko Widodo (Jokowi) expressed Indonesias readiness to cooperate with Myanmar.

We want to state that Indonesia is ready to cooperate with Myanmar, and we have prepared our experts to be dispatched to Myanmar, President Jokowi said and then pointed out that construction workers from Indonesia have been prepared to carry out various projects in Myanmar.

On that occasion, President Thein Sein congratulated President Jokowi on his win in the presidential election which makes him the 7th President of the Republic of Indonesia to replace Susilo Bambang Yudhoyono.

In addition, President Thein Sein also expressed his gratitude for President Jokowis attendance at the 25th ASEAN Summit in Myanmar.

Myanmar and Indonesia have established good bilateral relations, and Indonesia has given its great support for Myanmar in regional and international levels. We hope that Indonesia will always support Myanmar, President Thein Sein stated.

President Joko Widodo (Jokowi) stated Indonesias commitment to increase cooperation in enhancing ASEAN integrity in order to create ASEAN Community 2015. He asserted that Indonesia will always be Myanmars good friend in developing their bilateral relations and in advancing ASEAN.

Indonesia will always be a good friend for Myanmar in developing bilateral relations between both countries and also in advancing ASEAN, Jokowi said.

Indonesia will also keep encouraging its private and state-owned enterprises to invest in Myanmar, especially in infrastructures, telecommunications, and mining sectors.

And we want to emphasize that its really important for both countries to explore cooperation in transportation sectors, especially in operating direct flights from Indonesia to Myanmar vice versa, and also in banking sectors, in order to enhance Indonesia-Myanmar relations, President Jokowi added.

Responding to President Jokowis statement, Myanmar President U Thein Sein stated that both countries need to implement the cooperation plans.

I believe that the opportunities for business and investment will help advance both countries. I hope that you keep encouraging Indonesian business people to invest and do business in Myanmar, President Thein Sein said.

According to President Thein Sein, Indonesia and Myanmar have so far cooperated in agricultural sectors especially in rice production. Myanmar expects both countries to enhance their cooperation in the future.

As regards financial sectors, Myanmar has made reformation in these sectors and also in banking sectors.

The meeting between these two heads of states was included in the agenda of the 25th ASEAN Summit which bore the theme Moving Forward in Unity to a Peaceful and Prosperous Community. (*/ANT/ES)