Meeting with Indonesians Living in Australia, President Jokowi: Working Should be Ambitious 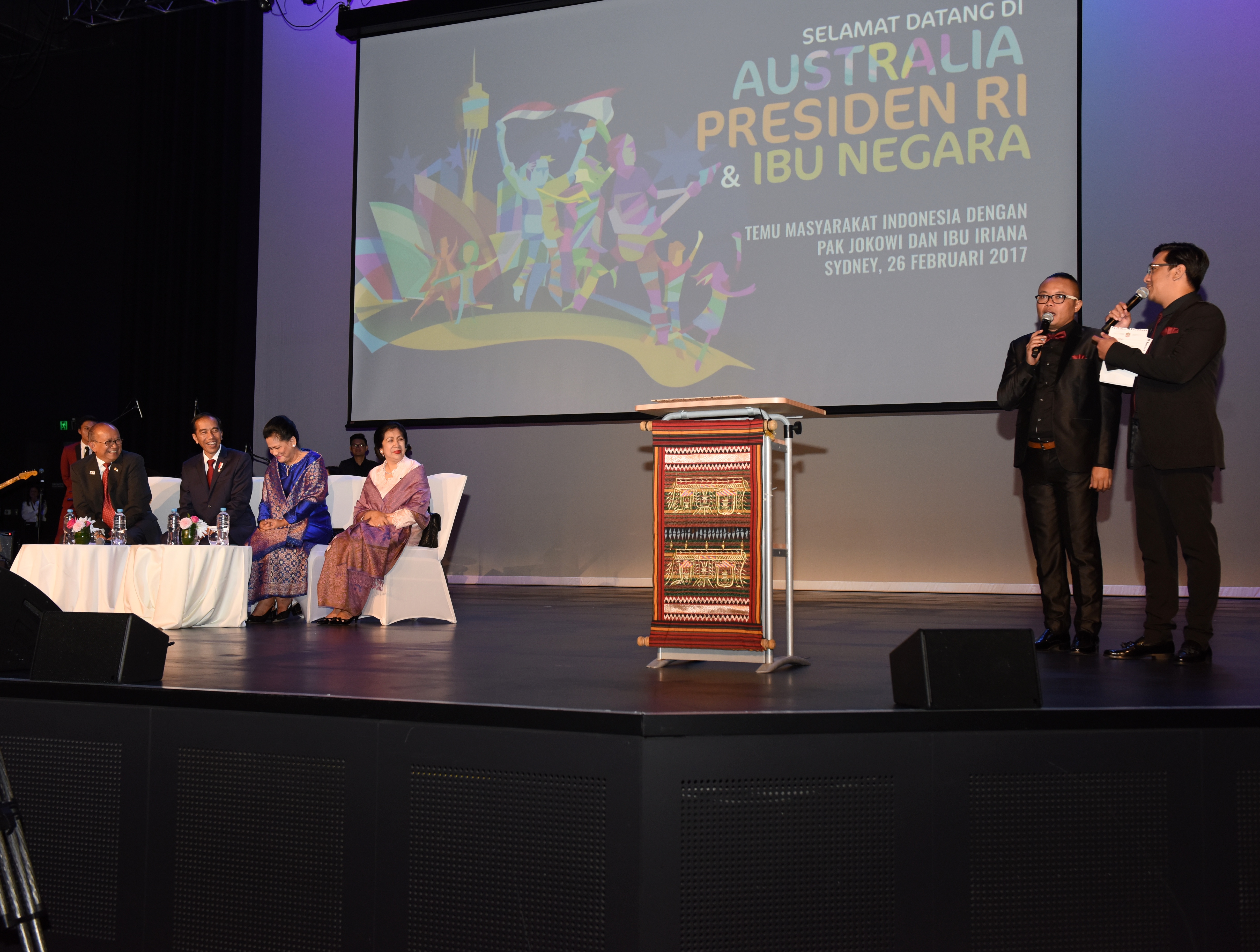 President Joko Jokowi Widodo admitted that many people find his policy to develop infrastructures around the country with the budget worth Rp342 trillion is too ambitious.

My policy indeed is ambitious, but working should be ambitious, President Jokowi said when meeting Indonesian citizens in Sydney, Australia, on Sunday (26/2).

Previously, President Jokowi asserted that the budget allocated for infrastructure projects rises significantly because the Government wants to focus on infrastructure for the next 5 years since infrastructure is the basis for economic movement. Compared to the 2016 budget, the 2017 budget is doubled from Rp177 trillion to Rp342 trillion. The amount rises because the Government do not want to divide the budget into a much smaller amount to all ministries, the President said.

President Jokowi also mentioned about the 35,000 Megawatt- power plant project. According to the President, many people doubt it and said, it cannot be done Pak, it will be difficult.

If it cannot be completed, the President added, we have to know the problems, difficulties, and the source of the problems. However, often, if an Indonesian is given a target, the goal will be less than the target.

President Jokowi reminded all that since our independence day 71 years ago, Indonesia only has 53,000 MW of electricity. Imagine that we want to develop 35,000 MW in 5 years, while during 71 years, Indonesia has only developed 53,000 MW. Many people think that it is impossible. However, even we cannot meet the target to develop 35,000 MW electricity in the end, 25.000 MW still can be counted as a remarkable leap. I believe we can develop more than 25.000 MW because there is 2.5 years left, the President said.

Therefore, the President added, the work needs to be splitted into 3 shifts, from morning, afternoon, to evening. If the workers used to work from morning to afternoon, now they have to work 24 hours (in shift).

Indonesia experiences power shortage indeed. Every time I visit a province, region, or regency, the people always tell the same complaint about power outage. They were angry at me, but I can understand since it is also a part of the mandate given to me, the President explained.

Also on that occasion, President Jokowi mentioned that the Government builds toll roads to reduce logistic and transportation costs. Consequently, the price of goods can be cheaper.

That are the projects that we have started. We have the pictures of Trans Sumatera Toll Road project connecting Lampung and Aceh, the President said.

President Jokowi admitted that people often doubt the project. At most, the project will be abandoned after the groundbreaking, they said.

For the people who do not believe it, look at the pictures or come to Lampung and Palembang to see whether the implementation on the ground matches with the pictures or not. Since the groundbreaking, I have monitored the real situation about 5 times already. I visited it again and again, I checked it again and again. Thus, the workers also think that they are being monitored, the President added.

Thus, the President added, the workers need to be monitored so they thought that there is someone who controls the work. People often forget to do this. Thankfully, the projects of Trans Sumatera, Manado-Bitung and Balikpapan-Samarinda Toll Roads which were abandoned for 8 years can be started again. We hope that after 5 years, the progress will be visible on how many kilometers of toll roads are completed, the President said.

Previously, Indonesian Ambassador to Australia Nadjib Riphat Kesoema said that the Presidents visit to Australia is an awaited moment. No wonder, on 21 February, a day after the registration of public gathering opened, the 2,500-seat room capacity was quickly filled, amazing, Nadjib said.

Moreover, the event was not only attended by people living in Sydney, but also those living in other cities such as Canberra, Melbourne, Wollongong, Brisbane, and other Sydneys surrounding cities.

According to the Ambassador, Indonesian citizens living in Australia consist of people who have lived there a long time, the professionals, lecturers, researchers, employees, and 19,000 students. They all hope to meet President Jokowi and First Lady Ibu Iriana in person today. Indonesian diaspora are known for upholding the values of multiculturalism which has also been promoted by Australia, Nadjib added.