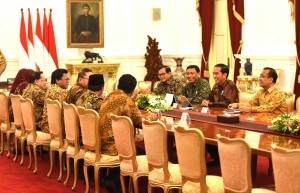 Speaker of the People’s Consultative Assembly of the Republic of Indonesia (MPR RI) Zulkifli Hasan reminded all people of Indonesia that we are brothers and sisters in diversity. “We agreed 71 years ago, we are brothers and sisters in the big family of the Unitary State of the Republic of Indonesia (NKRI). Not others,” the Speaker, accompanied by the senior leaders of the MPR RI, said after meeting with President Joko Jokowi Widodo, at the Presidential Palace on Tuesday (24/1) afternoon.

According to the Speaker, it is not our brothers and sisters that we worry about but how to deal with competition on the international stage that matters. He urges people to respect the law although it can leave scars or prolonged anger. “Let us return to the core values ??of Indonesia, that is, to promote consensus, dialogue with honesty, mutual respect, and dialogue without hatred,” he explained.

If there is an argument, the Speaker further said, as brothers and sisters, it is necessary for us to resolve the problems through a dialogue or deliberation. It is important for the Government to focus on building a more just, prosperous, and equitable Indonesia.

In addition, MPR RI also appreciated the Presidential Decree (Perpres) on the establishment of Pancasila (the five principles of state ideology) Stabilization Board, and expressed hope that in the future the Board could cooperate with the MPR. “This is the proposal of consultation meeting two years ago between MPR RI and the President. It has been followed up. We used to have Manggala BP7 (Intensive Course on the Board for Developing Education and the Implementation of Guidelines for Installing and Applying Pancasila), there are lessons about citizenship education, Pancasila education, intensive course, and so on,” the Speaker said adding that the consolidation of Pancasila needs to be adjusted in accordance with the times.