Meets a Number of Figures, President Jokowi AsksThat No Criminalization in Polri nor KPK 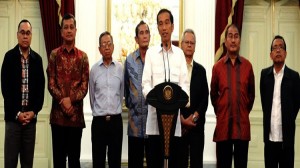 President Jokowi delivers a press release with a number of figures, at the State Palace, Jakarta, Sunday (25/1) night.

Related to the situation that developed after the determination of Commissioner General (Pol) Budi Gunawan as a suspect by the Corruption Eradication Commission (KPK), and determination of the Deputy Chairman of KPK Widjojanto by Investigators (Bareskrim) the Police of Republik of Indonesia (Polri), President Joko Widodo (Jokowi) on Sunday (25/1) night, call and ask the opinion of a number of figures.

The figures that meet the invitation of President Jokowi to the Presidential Palace, Jakarta, among others: former Chairman of the Constitutional Court (MK) Jimly Asshidiqie, former Deputy Chief Commissioner General (Ret) Oegroseno, former Chairman of KPK Tumpak Hatorangan Panggabean, former Vice Chairman of KPK Erry Ryana Hardjapamengkas, the Police Observers Bambang Widodo Umar, and legal experts from the University of Indonesia (UI) Hikmahanto Juwana. While Muhammadiyah figure, Buya Syafii was unable to attend because he was in outside of Jakarta.

In a press conference after a closed meeting with those figures, President Jokowi said that he and the figures were invited, agreed that the institution of Polri and KPK should maintain the authority as law enforcement agencies, including other law enforcement institutions such as the Supreme Court and the Attorney General.

According to the President, the legal process both in the police and KPK should run fine so that no intervention. “I keep watching and guarding,” he said.

“Everything should not be pretentious above the law, they have to prove both have acted correctly according to the applicable legislation,” President Jokowi said.

At the end of the press conference, President Jokowi again reminded that the legal process that occurs within the force of police and KPK should be bright and transparent. “There must be no criminalization,” he said.