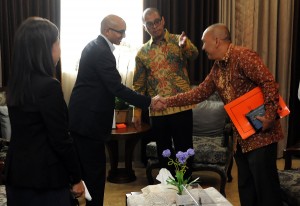 During the meeting, the Ambassador of Singapore asked for confirmation of re-plan the state visit of President Joko Widodo (Jokowi) which has not been realized. The plan, President Jokowi, will attend the 50th Anniversary of Singapore on August 9, 2015.

Previously, through a diplomatic note, the Government of Singapore through its embassy in Jakarta hopes that President Jokowi able to visit Singapore on 28-30 July.

In the environmental field, Cabinet Secretary, Andi Widjajanto and Singapore Ambassador, Anil Kumar Nayar agreed that it is necessary to encourage the implementation of trilateral and bilateral cooperation between Indonesia-Malaysia-Singapore in addressing marine and coastal pollution in the Straits of Malacca and Singapore, with regard to the provisions of international law that apply and sovereignty of coastal countries.

In such a meeting, the Ambassador of Singapore also expressed his concern on the issue of Rohingya refugees.

Cabinet Secretary, Andi Widjajanto conveys that the Government of Indonesia has a serious commitment to addressing issues of the Rohingya.

“The Rohingya issue has been discussed in the Limited Meeting and President Meeting with the leader of State Agency. In addition, the Ministry of Foreign Affairs has conducted trilateral meeting with Malaysia and Thailand,” Andi said.