Meets Jokowi, B.J. Habibie: President Elected by the People and Should Favor the Interests of People 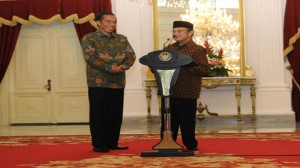 In a press statement, former President BJ. Habibie admitted that he had the honor and opportunity to stay in touch and exchange information with President Jokowi. Habibie said, in the state system in Indonesia, the President was not like the Old Order or New Order era, which is elected by the Assembly of Representatives (MPR). Currently, the President is elected directly by the people.

“So the President since SBY (Susilo Bambang Yudhoyono, red) up to the current president, elected by the people directly, and the criteria determined by the people themselves,” said Habibie.

Former President Habibie also noted, now there is no party that gained the votes more than 20 percent, while the Indonesian President elected by at least 51 percent. Therefore, Habibie believes, that the President elected should be 100 percent favoring to the interests of the people.

Habibie assess, what the President Jokowi told reporters after meeting with Prabowo, that he should be respect the processes of law, because now there is a pre-trial process, so we should be wait, that’s exactly right.

“Well let’s wait and now we are working. Because it’s not just such matter of course, but what about the development of this country, how do we increase productivity, education, improve the equity. Do not all focus on one issue. It has been said to wait, should wait,” Habibie said.