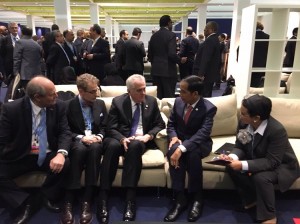 President Jokowi accompanied by Minister of Foreign Affairs Retno Marsudi talked with Dutch Prime Minister Mark Rutte, on the sidelines of the Summit on Climate Change, in Paris, France, on Monday (30/11). Photo: Rusman/Setpres.

Shortly after arriving at the Parc Des Expositions Du Bourget Paris, France, the venue for the meeting of the leaders of the UNFCCC COP21, Monday (30/11) Local Time, President Joko Widodo (Jokowi) conduct a bilateral meeting with the Prime Minister of the Netherlands, Mark Rutte.

Communication Team of President, Ari Dwipayana, in a press release on Monday (30/11) afternoon mentioned, at the meeting, which took place before the opening of the UNFCCC COP21 Leaders Event, both countries, focuses discussion on two things, namely the development of the National Capital Integrated Coastal Development (NCICD) and Deep Seaport Development.

Related with the development of NCICD, President Jokowi asked that the cooperation between Indonesia and the Netherlands in the construction of the National Capital Integrated Coastal Development (NCICD) can be accelerated.

In addition, Joko Widodo President also hoped cooperation between Indonesia and the Netherlands in the field of development can be forwarded Deep Seaport.

In response, the Dutch Prime Minister promised to send a team to Jakarta to discuss the cooperation.