Meets President Jokowi, Chairman of the MPR-RI Zulkifli Hasan Talked on the Continuation of the Hospitality Meeting 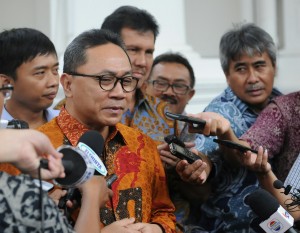 Chairman of MPR-RI, Zulkifli Hasan suddenly meets President Joko Widodo (Jokowi) at the State Palace, Jakarta, Monday (20/4) afternoon. Zulkifli claimed that the meeting between them to remind the continuation of relationship between state institutions.

Zulkifli explained, now it is April, so he hopes the good habits should be forwarded. “There is usually a consultation meeting between state institutions, which we first implemented in January in the Palace. State agencies usually every two months. The sequence is usually after in the Palace, then in the Assembly, then DPR, DPD, and other institutions,” he explained.

If we follow the order, according to Zulkifli, the next meeting should be held in the MPR. “It’s not good if there is a difference of opinion between state agencies,” Zulkifli Hasan said, pointing to the example of a feud that had occurred between the Corruption Eradication Commission (KPK) with the Indonesian National Police (Polri).

President Jokowi, further Zulkifli, already agreed, the hospitality (silaturahmi) meeting between state institutions remains held in the Palace after the Asian-African Conference (KAA). “Could the end of April, or early May,”  he said.

In addition relating to Hospitality (silaturahmi) between state institutions, Zulkifli Hasan, who also serves as Chairman of the National Mandate Party (PAN) said that his visit to the State Palace as well in order to convey an invitation to the President, related with will be implemented the inauguration of the board as well the congress of PAN, at 6 May, at Bidakara, Jakarta.

“So we extended an invitation to the President, we expect to be able to present in due course,” said Zulkifli Hasan.

Zulkifli hopes, at the inauguration and congress of PAN, there will be a momentum, which is Hospitality (silaturahmi) of party leaders from Red and White Coalition (KMP) and the Great Indonesia Coalition (KIH).