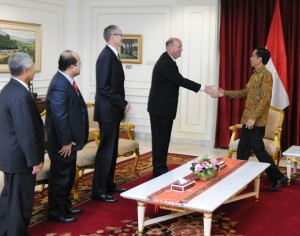 Moreover, according to Sudirman, in the meeting the ConocoPhillipis expressed the  commitment that they wanted to continue together with Indonesia to build the energy sector. Besides that has been done so far, ConocoPhillips also planned for future investment.

“This is an appreciation for the Indonesian government, because it is structural reforms undertaken is intended to provide certainty and provide fairness to the investment,” Sudirman said as he mentions that ConocoPhillips in its activities today and the future want to respond to the government policy.

Investment of 2.5 Billion US Dollars

Meanwhile, the Chairman and CEO of Global ConocoPhillips Company, Ryan Lance, in a statement to reporters admitted his excitement as he could convey my congratulations to the President Jokowi, and introduced more about Conoco to the President.

Ryan explained, that ConocoPhillips has been here for 40 years and has invested as much as 2.5 billion dollars in the last 4 years. “We also plan to invest 2.5 billion in Indonesia,” he explained.