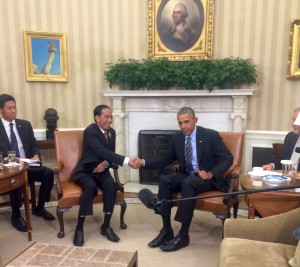 President of Indonesia Joko Widodo (Jokowi) thanked the President of the US Barack Obama, who had received him and the Indonesian delegation very well, during a visit to the White House, in Washington DC, US, on Monday (26/10) at 14.35 local time or Tuesday 927/10) at 1:35 pm. The President said that Indonesia welcomed the strategic partnership between the two countries, which showed an increase symbol of cooperation between Indonesia and the United States.

“We believe that Islam in Indonesia is able to play an important role in maintaining democracy and pluralism and against radicalism and terrorism,” President Jokowi said, in a joint press conference with US President Barack Obama, at the White House, Washington DC, Tuesday (27/10) pm.

“I had invited the US to cooperate with Indonesia in this digital economy,” President Jokowi said.

Related to the issue of climate change, according to the President Jokowi, he had a serious discussion with President Barack Obama about it. “We agreed to cooperate in addressing this issue for the future of generations to come,” Jokowi said.