Meets Regents / Mayors of East Indonesia, President Jokowi: In Order For Us Have the Same Vision 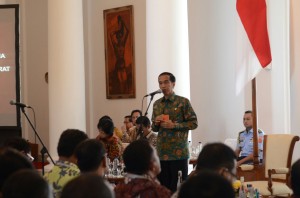 Meets Regents / Mayors of East Indonesia, President Jokowi: In Order For Us Have the Same Vision

In his remarks, President Jokowi said that he purposely collect the Regents/Mayors with the aim that all have the same great vision.

“In order that we have big plans for the future of this nation and that we might have the great ideas that we synchronize in our great organization the Republic of Indonesia,” President Jokowi said.

Therefore, according to the President, meeting with Regent/Mayor may be carried out every three months or every four months, or maybe six months, the Minister of Home Affairs will see that, or maybe we need to look at the situation.

“If all can be in-line, understand, I think the meetings to discuss the issues in the region is still needed as well,” said the President.

Meanwhile, Minister of Home Affairs Tjahjo Kumolo in the report said, that the Act No. 23 of 2014 regulates the obligation Head and Deputy Head of Region, to implement a national strategic program, in addition to priority programs according Regional Head Election campaign promises.