Meets the Residents, President Could Continue the Construction of Seunara Dam in Sabang 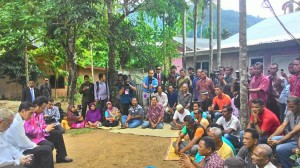 President Jokowi dialogues with citizens related to the construction of dams Seunara, in Sabang, Aceh, on Tuesday (10/3)

According to President Jokowi, the dam has been done since 2001 to 2006.  However, it still leaves the problem, that cannot be closed the area because there are still more than 200 families who have not been acquired their land.

“But after meeting with the public, actually, there was no problem, Mr. Governor, Mr. Mayor no problem now, I also met with the minister earlier, then fine. This year should be completed. Do not have to wait for 2016,” said President Jokowi told to reporters in the vicinity of the dam.

Seunara Dam located in the district of Sukakarya was used to provide the raw water to the Sabang Town as much as 125 liters per second. In addition, this dam is used as a tourist water object and inland fisheries.

Meanwhile, Minister of Public Works and Public Housing Hadimuljono Basuki said that earlier, in the Seunara dam area, there is Anak Laut lake. After the earthquake, the index of Sabang’s drinking water down continuously.

“Hence, the dam is needed for the water tub of Sabang Town, this building has been completed of all, the latter closed the area,” Basuki said.

A visit to the Seunara Dam is a series of working visit of the President to Sabang Town, which accompanied by Coordinating Minister of Maritime Indroyono Susilo, Cabinet Secretary Andi Widjajanto, Minister of Public Works and Public Housing Hadimuljono Basuki, and the Governor of Aceh Zainal Abidi.

After visiting the Seunara Dam, President Jokowi and his entourage also visited the Free Port in the Sabang Town, especially CT3 Dock that built by the Regional Development Agency for the Free Port of Sabang (BPKS).

CT3 Dock BPKS of Sabang, has a quay length of 420 meters with a depth of 35 meters draft reach. Therefore, it is safe to be visited by large ships weighing over 10,000 DWT. This port has met the standards of the International Ship and Port Facility Security (ISPS). (Humas Setkab/ES)