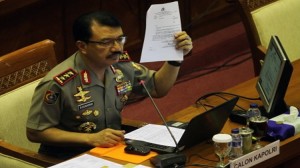 Cabinet Secretary, Andi Widjajanto said, President Joko Widodo (Jokowi) on Wednesday (28/1) will discuss the government’s stance regarding the certainty of the Commissioner-General (Komjen) Police Budi Gunawan as the Head of the Indonesian National Police (Kapolri).

The discussion in response to the deadline given by the House of Representatives (DPR), that has approved Budi Gunawan as Police Chief (Kapolri), after President Jokowi dismiss General (Pol) Sutarman from the post of Kapolri.

Instead, the President issued Presidential Decree on assignment of Deputy Kapolri Commissioner General (Pol) Badrodin Haiti to carry out the duties, responsibilities, and authority as Kapolri.

“Today the President will meet the Presidential Advisory Council (Wantimpres), and independent team consisting of nine figures (Team 9). Watimpres already convened two days ago, and the results of the meeting will be discussed,” Andi said.

“This government does not recognize of 100 days. Ministries and institutions has a short-term targets that different. No indicator 100 days of the President” Andi Widjajanto said.

Andi added that there is a minister that set short-term targets of the week, for example, Ministry of Social Affairs, Ministry of Education and Culture, and Ministry of Health, that rolling the Family Welfare Card, Indonesia Smart Card and Healthy Indonesia Card.

As for the ministry that takes care of licensing, President Jokowi set a target of one month, and there are ministries that have a short-term target of six months.

The work pattern of the President, according to Andi, will remain the same after 100 days; the remains will often go to the field. Likewise, President Jokowi asked the ministers to more frequently to the field, not in the office.  (WID/ES)