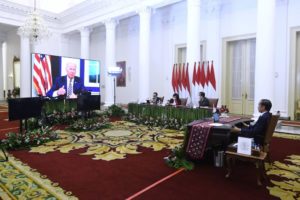 The Indonesian Government has affirmed its commitment to tackle difficulties in energy and climate sectors.

“Credibility, especially in the form of concrete actions, is very crucial,” President Joko “Jokowi” Widodo said in his remarks at the 2021 Major Economies Forum (MEF) on Energy and Climate meeting via a video conference from Bogor Presidential Palace in West Java province, Friday (17/09).

According to the President, the difficulties cannot be handled by one country only as a joint global action is a key factor.

On the energy sector, Indonesia, the President said, has carried out transformation towards new and renewable energy as well as an economic acceleration based on green technology in August.

“To realize this transformation, we have devised a strategy for switching coal power plants to new renewable energy ones, accelerated development of new renewable energy infrastructure supported by energy efficiency, increased the use of biofuels, and developed the electric vehicle industry ecosystem,” he said.

The President went on to say that Indonesia also aims to achieve carbon neutrality (net zero carbon emissions) by 2060 and its pilot area is still being developed.

“It includes the construction of Green Industrial Park covering an area of ​​20,000 hectares, the largest in the world, in North Kalimantan province,” said the President.

On energy transition, the Head of State stressed that a global partnership is indispensable because developing countries need affordable financing and technology for the transition.

President Jokowi also expressed support for the Global Methane Pledge, a joint action pledge aimed at reducing 30 percent of global methane emissions by 2030, adding that the pledge would become a momentum to strengthen partnerships in a bid to support the capacity of developing countries.

“Along with the United States and 45 other countries, Indonesia has also joined the Global Methane Initiative. Reducing methane emissions has been included in Indonesia’s Nationally Determined Contribution (NDC),” he remarked. (BPMI/UN) (FI/EP)