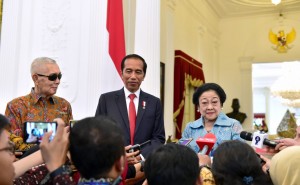 They both congratulated me for the KPUs (the Indonesian General Elections Commission) announcement from (which stated) Jokowi and Ma’ruf Amin (as President and Vice President of the Republic of Indonesia for 2019-2024), President Jokowi said.

President Jokowi also congratulated Megawatiwho is also Chairman of the Indonesian Democratic Party of Struggle (PDI-P)for gaining the most votes in the legislative elections. For a total of 19.33 percent, he added.

On the occasion, Megawati said that both her and Try Sutrisnos visit was indeed intended to be the first to congratulate the President for the election results.

Meanwhile, Try Sutrisno expressed hopes that in the second administration, President Jokowi could continue to build the nation and in the same time re-uniting the country after the election.

If we unite we can be strong, but if we don’t unite it will weaken us and it is dangerous, Try said.

We pray and hope that everything is safe, President Jokowi said. (BPMI/EN)