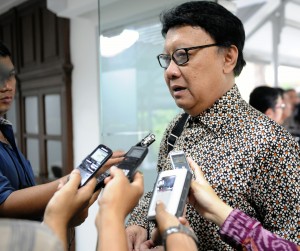 Presidents instruction to accelerate the process of infrastructure development including transportation and others, Tjahjo Kumolo told reporters prior to Closed Cabinet Meeting on Economy at Presidential Office, Jakarta, Wednesday (17/12).

Previously in Tarakan North Kalimantan (Kaltara), President Jokowi said that the handling of border regions was still far from optimal. Hence, not only economy of the areas got stuck, but also the people lacked of welfare.

Whereas the allocation for Indonesian border region wholly was huge, reaching Rp 16.04 trillion and the coordination of the handling was conducted by 27 ministries.

With the involvement of 27 ministries and other agencies, without good coordination and planning, the use of Rp 16.04 trillion is not only unclear but its result is even unheard, Jokowi who had just visited border region in Sebatik island Nunukan District, North Borneo, said on Tuesday (16/12).

Therefore, the President determined to simplify ministrys responsibility, coordination, and budget allocation. We will discuss to change 27 ministries into 3 or 4 ministries focusing on responsibility to handle it, Jokowi said.

Mendagri Tjahjo Kumolo said that President Jokowi asked him to accelerate the process of infrastructure development including transportation and others.

Therefore, Tjahjo thought that the most important ministries currently were ministry of Public Works (PU), Ministry of Transportation, including Ministry of Communication and Information.

Related to the acceleration of the development, President also instructed Ministry of Home Affairs to minimize ineffective coordination level resulting not optimal use of funds for border region.