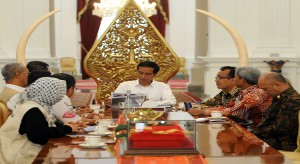 President Jokowi when receiving a delegation of MER-C, at the Presidential Office, Jakarta, Wednesday (17/6) afternoon

During the meeting, delegates of MER-C reports the completion of the construction of the Hospital (RS) of Indonesia in Gaza, Palestine, and invited President Jokowi to attend the grand opening ceremony that will be held in the near future.

President Joko Widodo (Jokowi) expressed very deep appreciation over plans grand opening Indonesia Hospital in Gaza, Palestine, in the near future, and assess the development of  Indonesia Hospital is a form of solidarity the people of Indonesia to the Palestinian people.

“President also expressed the government’s commitment through the relevant ministries and institutions and representatives of Indonesia to facilitate assistance to the Palestinian people in order to get to the destination,” said the President Communications Team, Teten Masduki, that accompanied President Jokowi when receiving a delegation of the MER-C.

The Government of Indonesia, President Jokowi continued, has taken concrete steps to support the Palestinian cause. “This is manifested in the form of, among others, the establishment of an Honorary Consulate in Ramallah and the development of Indonesia Cardiac Centre at Al Shifa hospital in Gaza,” President said as quoted by teten masduki in a press release Wednesday (17/6) afternoon.

Responding to the invitation for President Jokowi to attend the inauguration and grand-opening hospital Indonesia, according Teten, President still need to see whether it is possible to attend the event.

Related with the plan of Grand-Opening of Indonesia Hospital, President Jokowi advice that the MER-C need to be patient waiting for the Egyptian government permission to entering Palestine through Rafah, to avoid rejection of the group that can be negative publicity.

“President also called on the MER-C to be careful, in order the assistance is not impressed accepted by one of the foundations/organizations/institutions, whose members are affiliated with one certain faction in Palestine,” said Teten while mentioning, that the hospital management which will be manage of Indonesia hospital, namely Kamal Edwan hospital, and is not affiliated hospital/owned by one of the factions in Palestine.

While the Presidium MER-C Jose Rizal Jurnalis said that Indonesian Hospital in Gaza is currently in a soft launch phase with the intention that the facilities can be used, and not redundant.

He said the necessary equipment for the hospital is now complete. “Tool is complete, the hospital has been completed, and as a sign of official, we asked Mr. President inaugurated,” Jose Rizal said.

Indonesian hospital stands on an area of 16 261 m2, and the plan will be devoted to this hospital traumatology and surgical services to the Palestinian people.

According to Jose Rizal, Indonesia Hospital has a capacity of 100 beds, 4 operating rooms, 10 bed ICU is equipped by modern equipment such as a CT scan of 128 slices, a land area of 1.6 acres, hospital area of 10,000 m2, 2 and a half floors basement and could expand to 3 floors again.