Merak  Surabaya to be Linked by Toll Roads in 2018 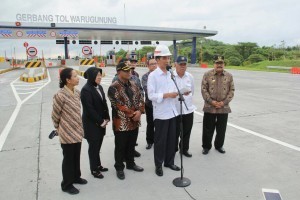 President Jokowi during the inauguration of Surabaya  Mojokerto Toll Road

At the end of 2018, the Government also aims to access from Merak to Surabaya to be passed by toll roads continuously.

Acceleration of the development of toll road as a part of national road network system is one concrete measure in manifesting the Nawacita (nine programs of President Jokowi and Vice President Jusuf Kallas Administration) which is to increase peoples connectivity and the nations competitiveness.

Trans Java Toll Road is necessary to improve connectivity in Java Island, which contributes more than 50 percent to the national economic development.

We are racing against time because competition among countries is getting fiercer. Developing countries that will become developed countries are those with strong competitiveness, and efficiency. Therefore, the reason why we are pushing the development of toll roads, seaports, airport, and power plants is for the sake of nation competitiveness, President Jokowi said during the inauguration of Sumo Toll Road.

From the total of 1,167 km, 561 km of Trans Java Toll Road have been operated, while 433 km is still under construction, and 172 km is still under investment auction stage. The budget spent for this toll road is mainly sourced from private sector investment, while the State Budget only serves as the Governments support in improving the financial feasibility of that toll roads.

Sumo Toll Road is the 11th toll roads to be operated in 2017 in which nine of the 11 were inaugurated by President Jokowi.

Sumo Toll Road is connected to Mojokerto  Kertosono (Moker) Toll Road which has been operated. Thus, the total length of Surabaya-Jombang-Kertosono Toll Road will be 76 km and it can be reached in about 1 hour, or 2 hours faster than the previous route.

Based on Ministerial Decree of the Minister of Public Works and Public Housing Number 916 of 2017, toll rates for Sumo Toll Road is Rp1,050 per km for Vehicle Type 1 or Rp38,000 for the furthest distance. In the near future, Surabaya-Mojokerto-Kertosono Toll Road will be linked to other toll roads, and will be operated in 2018.

I have met with entrepreneurs from Jombang who now can deliver the products faster to Surabaya. Before toll road is constructed, they must depart early and will arrive in Surabaya at noon. Now, they can reach Surabaya in only 1 hour, so they can deliver multiple times, Minister of Public Works and Public Housing Basuki Hadimuljono said.

Once access from urban area to hinterland is getting smoother, it will drive emergence of new housing areas outside of Surabaya that will become more well-organized residential areas. In addition, the development of toll roads will also attract investors to the areas and encourage them to build offices or factories there. (Biro Komunikasi Publik Kementerian PUPR/ES) (RAS/EP/YM/Naster)