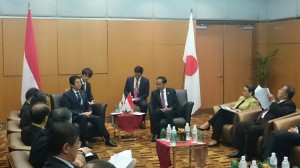 During the meeting, according to the Communications Team of President, Ari Dwipayana in a press release on Sunday (22/11), the two Heads of State agreed to boost the cooperation could strengthen the relations between the two countries, particularly in infrastructure such as power plants, ports and others.

Abe admitted that the relationship between both countries is very good and Indonesia is a strategic partner for Japan. Abe also hopes the two countries can cooperate closely in various sectors.

“Particularly regarding the infrastructure, I think that the development in Indonesia is important for the prosperity of the region,” Abe said.

In addition to infrastructure, cooperation is also carried out in the fields of politics and defense where the Minister of Foreign Affairs and Minister of Defense of both countries will have a meeting, which will take place in Japan in December 2015. “The meeting will contribute to the strengthening of political and defense cooperation between the two countries,” President Jokowi said.

The closeness of the relationship between Indonesia and Japan also indicated by the presence of business and political figures of Japan to Indonesia, led by Chairman of the Parliamentary League Indonesia – Japan, Toshihiro Nikai.

President Jokowi believes this visit will certainly strengthen the relationship between both communities. “Tomorrow I will give Merit of Honor to Mr. Toshihiro Nikai for services to Indonesia in the Palace and in the evening will receive prominent figures from politics and business people of Japan,” President said.