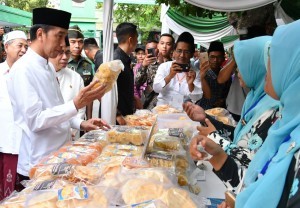 For the record, the Government has established 41 Micro Waqf Banks.

On that occasion, President Jokowi said that the establishment of the Micro Waqf Banks aims to improve the people’s economy by expanding financial access for micro and small business owners.

“Conventional banks usually require collateral and administrative process. Sometimes it is difficult for small business owners to access the banking facilities. The Micro Waqf Bank is established (to solve those problems),” the President said.

“We will evaluate (the implementation) annually and will establish (the micro banks) in Islamic boarding schools throughout the country,” the President added.

President Jokowi went on to say that he once met a woman in Banten who are able to develop her business and diversify her business products using the Micro Waqf Bank financing.

For the record, the Financial Services Authority (OJK) states that from October 2017 to November 2018 the Micro Waqf Banks have provided financing to 8,373 customers with a total amount of Rp9.72 billion.

The lending limit provided by the Micro Waqf Bank is Rp3 million. The financing is without collateral and is subject to 3% administration fee per annum, allocated to support the operation of the bank. The Micro Waqf Bank also provides capacity building to the customers to develop their businesses.