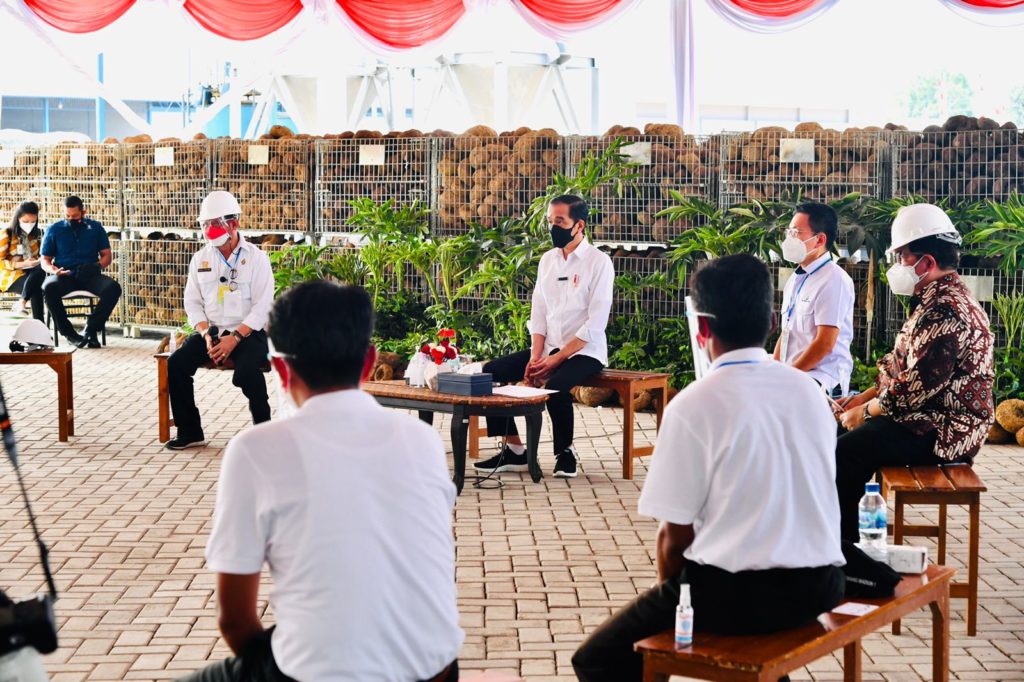 A young farmer named Yoyok Triyono told the President that konjac farming is very promising and he encouraged other youth to join the trend.

He added that the trend of jobs in Madiun, particularly in his village, has shifted. Previously, after graduation young people were seeking job in the cities, but now they work in konjac farming.

“After three years of work, they can buy a car,” Yoyok said while adding that konjac is a very promising commodity and is easy to grow.

Similar view was also echoed by other farmers. Many millennials have changed their view about farming. Becoming a farmer is no longer a back-up plan, people flock to the hometown to be a farmer, he said.

For the record, the plant that has scientific name Amorphopallus muelleri blume¸ belongs to the tuber family. It is low in calories and sugar free so it can be processed into food or cosmetics.

On that occasion, President Jokowi told the farmers to not only grow the commodity but also to process it into a finished product, for example konjac chips.

“The Government expects you to do the process. We cannot let the process is carried out in other country, such as Japan, China, South Korea, or European countries. We must process our own commodity to strengthen upstream and downstream industries, as well as to bring added value to domestic products,” he explained.

The President went on to say that the Government has considered to develop a favorable and mutually beneficial environment that will bring economic benefits to the people while still preserving the environment. Therefore, he ordered Minister of Agriculture to do detailed planning on the potential of konjac as future priority commodity which will serve as a guide for konjac farming.

“Looking back, because people living around Perhutani (the state forestry company) areas were not prosperous, they started to deforest the land. Once it (konjac farming) can be massively developed not only in Java Island but also outside Java, I hope it will reduce deforestation,” he stated.

According to the President, agriculture is a sector that is not much affected by COVID-19 pandemic. Agricultural commodity grew by 2.95 percent in the first quarter of 2021.

“For that reasons, I order Minister of Agriculture to pay close attention to this commodity, to do medium-term and long-term planning, export it as finished products not raw materials, and create added value in Indonesia,” he concluded. (PRESIDENTIAL SECRETARIAT/UN) (RAS/MMB)