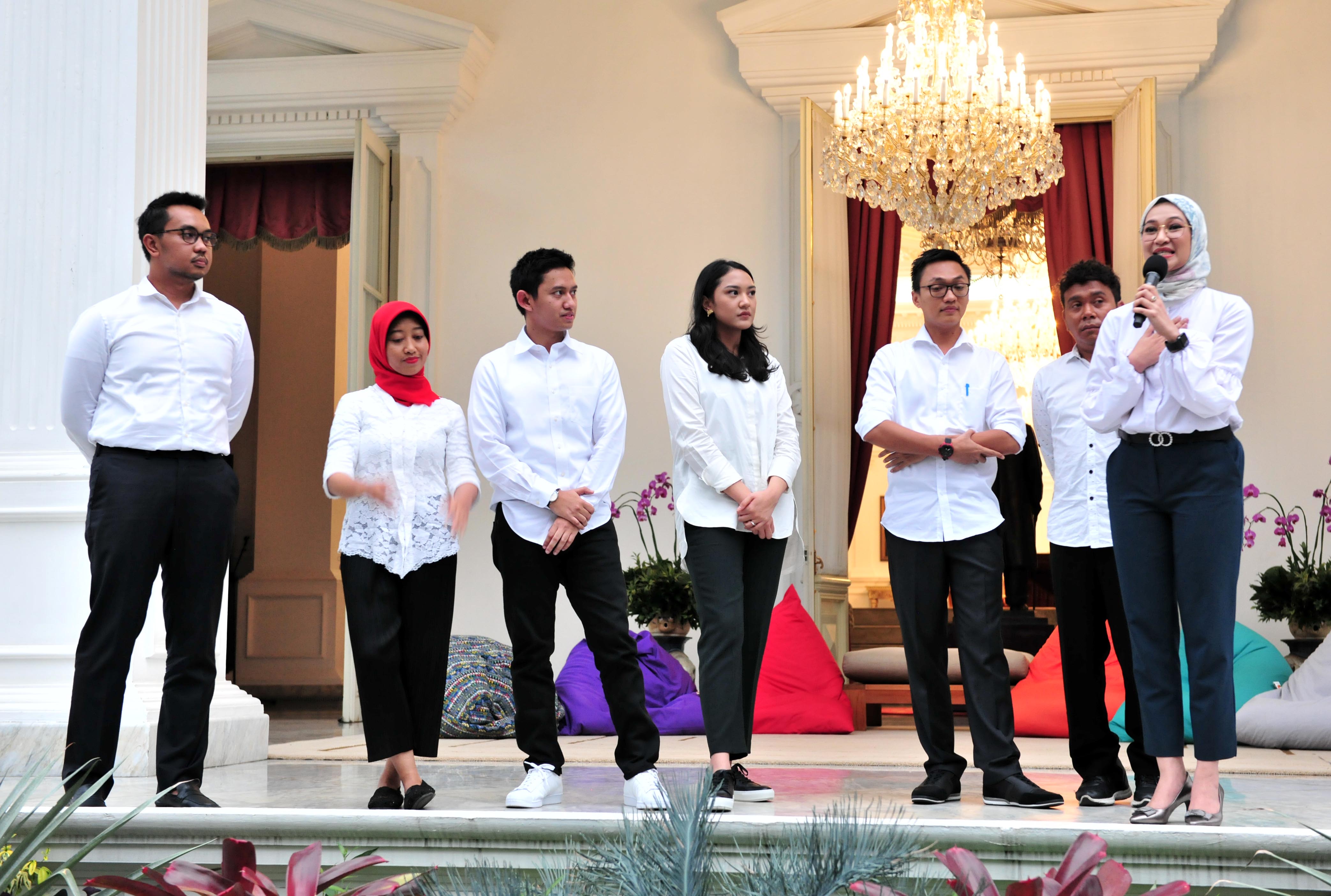 Young people who are appointed as Special Staff to the President introduce themselves to the press, at Merdeka Palace, Jakarta, Thursday (21/11). (Photo: JAY/PR)

Millennials who were just appointed as Special Staff to the President recently spoke up about their appointment.

“We feel grateful and surprised at the same time because we never imagine we could join the Palace (the Presidential administration) at such a young age,” said Adamas Belva Syah Devara (29), founder and CEO of Ruangguru, an education technology startup. <!–more–>

Adamas admitted that his appointment is a mandate from the President, meaning that the millennials should give contribution to the public policies.

“Surely there are numerous sectors we have to handle, such as education, youth, entrepreneur, art, creative economy, disability, underdeveloped regions, fintech, peace and tolerance, and so on,” Adamas said, adding that he will give his best to fulfill the President’s expectation for the advancement of Indonesia.

Meanwhile, Gracia Billy Mambrasar (31), a Papua-born and Australia National University graduate, said that he is committed to helping the President as well as the Government and will not work with ‘business as usual’.

“We will try to give the different perspective with latest technology to build a system that is more effective and efficient in the future,” Billy said, adding that he has 9-year experience focusing on training entrepreneurship for young people in eastern parts of Indonesia.

“I will use those experiences to help the President building the outermost regions, including my hometown Papua, by using digital system and technology. We will bring different atmosphere,” Billy continued.

In the meantime, Putri Indahsari Tanjung (23) said she is grateful to the President for the trust.  Putri started her business named Creativepreneur when she was 15 years old. Creativepreneur is an event organizer and agency which focuses on teaching entrepreneurship to the young generation throughout Indonesia.

Also serves as the Chief Business Officer of Kreavi, a creative platform which already has 55,000 creative creators, she has helped the MSMEs to repackage and branding their products.

“I believe Indonesia has great potentials in creative economy especially in this digital era. So I would like to express gratitude to President Jokowi for the opportunity given and I hope I can voice the aspirations of the young people of Indonesia,” Putri f said.

Ayu Kartika Dewi (36), founder and mentor of SabangMerauke program, said that young generations are the pillar of Indonesia.

“I think it is very crucial to master the 21st century skills, namely 4C (Critical thinking, Creativity, Communication and Collaboration),” Ayu said, while expressing belief that Indonesia will advance as long as the young generations can master those skills.

Meanwhile, Angkie Yudistia (32), entrepreneur with disability as well as founder of Thisable Enterprise, said that her appointment will be used to voice aspirations of 21 million disable people.

“I am proud to be here and represent the Thisable Enterprise that I have built for 8 years. This is the time for disable people to be equal with others and to create more favorable environment for them,” Angkie said, adding that she is committed to build Indonesia to be more disable-friendly. (FID/JAY/ES)