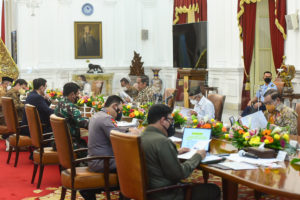 President Jokowi leads a limited meeting on the evaluation of public activity restrictions (PPKM), Monday (15/11), at the Merdeka Palace, Jakarta. (Photo by: PR/Agung)

The number of daily COVID-19 confirmed cases and active cases in Indonesia shows a declining trend and at the moment there is no region implementing public activity restrictions (PPKM) Level 4.

The statements were made by Coordinating Minister for Economic Affairs Airlangga Hartarto after joining a limited meeting led by President Joko “Jokowi” Widodo on the evaluation of public activity restrictions (PPKM), Monday (15/11), at the Merdeka Palace, Jakarta.

The Coordinating Minister said that the number of daily COVID-19 confirmed cases and active cases in Indonesia stood at 339 and 9,018 cases, respectively. In addition, the 7-Day Moving Average (7DMA) of daily new cases decreased to 384.

“[The number of] daily confirmed case in regions outside the islands of Java and Bali reached 135 cases, with 7-Day Moving Average [7DMA] of 117 cases. Such a consistent declining trend,” he said.

Airlangga added that the number of active cases in regions outside the islands of Java and Bali as of 14 November was 4,339 cases or declined by 98 percent compared with its peak on 6 August, with recovery rate of 96.57 percent and mortality rate of 3.12 percent.

In regard to the organization of the World Superbike (WSBK) in Mandalika, West Nusa Tenggara province, five host regencies/municipalities fell into Level 1 category.

Following the Government’s target to administer first dose of COVID-19 vaccines to 70 percent of total population in West Nusa Tenggara province by the time of WSBK event, almost all regions in the province have met the target, leaving only East Lombok with vaccination coverage rate of 68.99 percent.

On that occasion, the Minister also announced that PPKM for regions outside the islands of Java and Bali is extended until 22 November. (TGH/UN) (RAS/MMB)