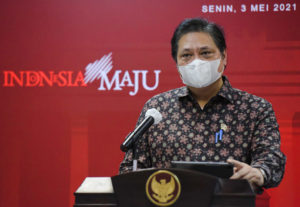 Coordinating Minister for Economic Affairs Airlangga Hartarto asserted that public activity restrictions (PPKM) implemented in regions outside the islands of Java and Bali have successfully decreased the number of provinces implementing PPKM Level 4 from two to zero.

For the record, the Government has extended the period of PPKM in regions outside the islands of Java and Bali from 7 until 20 September 2021 and the evaluation will be made fortnightly.

On that occasion, Airlangga also underscored that testing results in regions outside Java and Bali in the last week have exceeded the target. However, there are three provinces with testing rate of under 50 percent; namely Aceh, West Sulawesi, and Southeast Sulawesi. On the other hand, tracing results in the regions are still low.

“As for tracing, one province recorded a rate of above 10, namely North Sumatra. In addition, [weekly] positivity rate as of 12 September was at 3.5. Regions outside Java and Bali are also within that range,” he said.