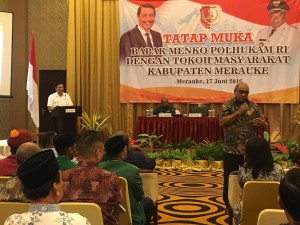 The Indonesian Government ensures that an Integrated Team under Coordinating Ministry for Political, Legal, and Security Affairs which was established to address the human rights cases in Papua carries out its task independently, transparently, and without interference from the Government.

They (Integrated Team) work in transparency; everyone may see the process, including you. Therefore, I invite the ambassadors of neighboring countries including from Fiji, Papua New Guinea, and Solomon Island to become the observers so that they can monitor the process and the transparent data. The team is currently still collecting the data, Coordinating Minister for Political, Legal, and Security Affairs Luhut Binsar Pandjaitan told the reporters after a meeting with public and religious figures of Jayawijaya Regency, on Friday (17/6), in Wamena, Papua.

Luhut also explained how the Integrated Team works and asserted that everyone can get information about the working progress of the team.

Theo Hesegem, one of representatives of Papuan, told the participants of the meeting the way the team works.

We work independently, the Government does not interfere in the process. We are currently still collecting the data, he said.

Responding to the objection of a member of Komnas HAM towards the Integrated Team, Luhut said that the statement was solely a personal opinion and does not represent the views of the Commission as an institution.

On that occasion, Luhut explained that the Indonesian National Defence Forces (TNI) personnel also became victim in the human rights cases in Papua and some of them were decapitated in hands or feet; yet the news have not been published before.

However, we do not want to rule out the possibility that the TNI or the Indonesian National Police (Polri) are at fault for the case. We will process the punishment to anyone whom at fault, including TNI and Polri as long as we obtain the data, Luhut said.

Asked about a demonstration of National Committee for West Papua (KNPB), Luhut answered that it is everyones constitutional right.

Just one thing, the Police must apply several rules in the demonstration that accords with the provisions of the law, for example by limiting the time, pointing specific places to hold the demonstration, and ensure that the demonstration do not violate the rights of other people, Luhut suggested.

Honestly, I do not know the details because I am not in the team. However, if anyone says that we made up the team, I ensure you that it is a groundless accusation. I allowed the Ambassador of Papua New Guinea to have the data when he asked, and the data was already sent to his country, Luhut explained.

In the meantime, Papua New Guinea Ambassador to Indonesia Peter Ilau said that he supports Indonesia to solve the issue internally because a settlement offered by other countries may not necessarily match with Indonesia, while Solomon Island Ambassador to Indonesia Salana Kalu told the participants of the meeting that he feel honored to become a part of the team because not every countries have the opportunity.

Meanwhile, Fijis Ambassador to Indonesia S.T Cavuilati said that as a member of Melanesian Spearhead Group in which Indonesia was appointed as an ‘associate member’,  his people are glad with the initiative of the Government of Indonesia.

We monitor the condition on the ground and realize that it has never happened before, Cavuilati said hoping this measures could improve the condition in Papua. (DNA/Humas Kemenko Polhukam/ES)